A recent post by Chuck Csizmar focused on the “Easy Road to Global Compensation Success.” In his post, Chuck emphasized that taking a headquarters-country approach to managing compensation systems around the world might not be best, despite some perceived administrative advantages.

“Think Globally, Act Locally”
To steal the popular phrase used to describe environmental strategies, it’s really important to recognize that markets are different around the world, and company compensation programs should reflect a balance between global corporate philosophy and local practice and culture.  Successful companies already recognize this when deciding which products to make and sell, how to market and promote them, pricing strategies, etc.  So, it should not be surprising to find out that local reward practices differ from country to country.

Salary Scales – A Simple Example
Let’s look specifically at salary scale design to illustrate why local practice matters.  Employers use salary scales to define the range of pay that is associated with particular grades or bands within their organization.  The definition of the grading scheme should be global; there should be consistent measures of contribution used to determine job level, regardless of market, and they should reflect the corporate culture as well.  But should there be one universal salary scale across multiple countries?  I believe the answer is no.

Why?
The basic approach to designing a salary scale is defined by the span (difference between minimum and maximum) and the inter-grade differential, or IGD (increase from one grade to the next, usually measured at the midpoint).  The table that follows shows two typical salary scale designs, for the United States and Kenya:

You will notice several differences, including:

You can see the differences more dramatically when looking at a graphical representation of the scales in the two figures that follow (click the graphs to open full-sized views in a new window): 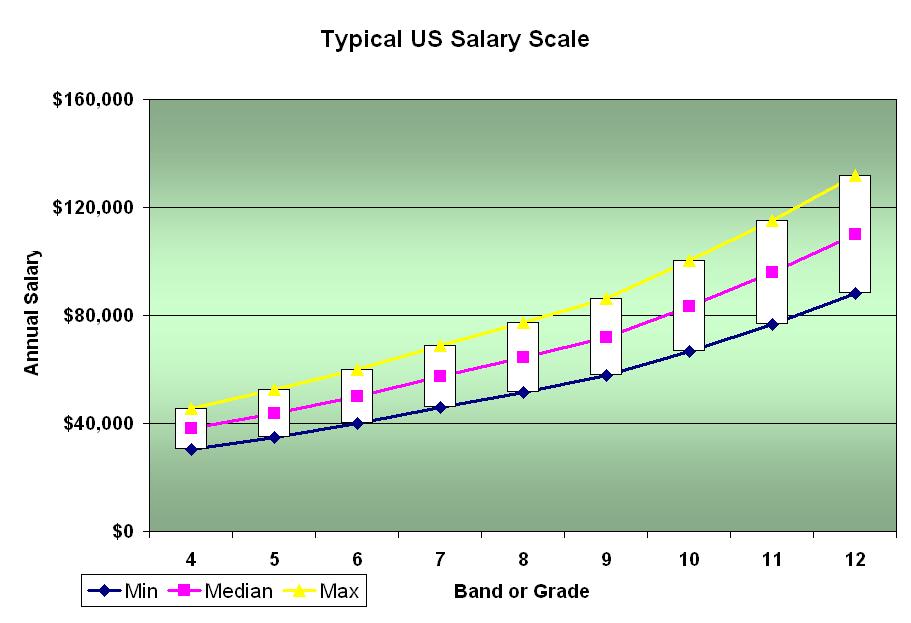 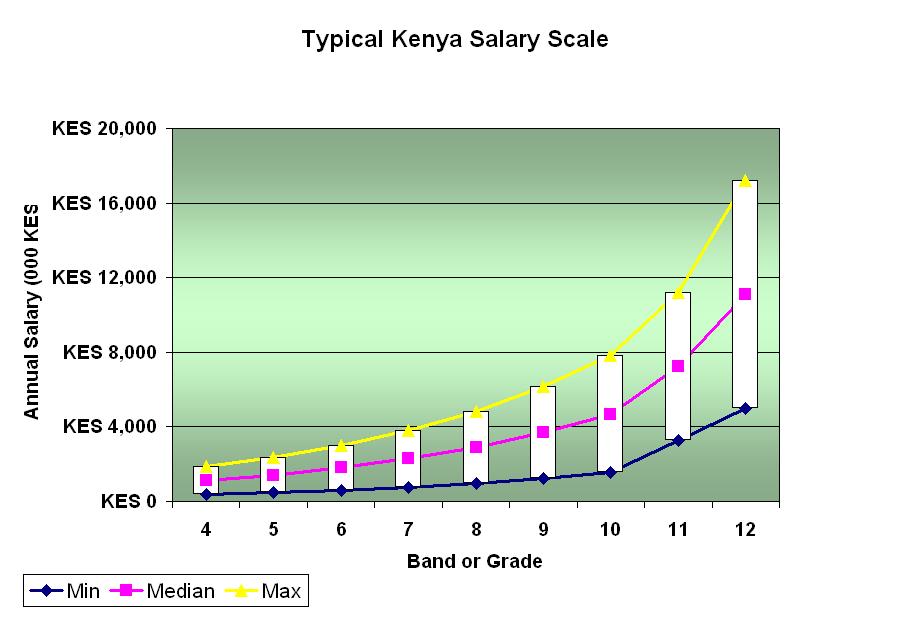 One of the most dramatic differences is the big jump in Kenya between grades 10 and 11, and 11 and 12.  In fact, we see this pattern in many developing countries around the world.  The shape of the scale midpoints (the pink line) looks like a hockey stick, with the Managers grades (11 and 12) forming the head, while the other grades form the handle of the stick.  Contrast this to the shape of the line in the US, which illustrates a more even rate of increases across all levels.

If you dig a little deeper into the numbers, you can identify some reasons why the scale designs in these two countries differ.  For example, the market movement for salaries in the US averages around 3.5% (maybe even less last year).  In Kenya, market movement in 2009 was over 20%.

With market movement over 20%, if the spans were like the ones in the US, employees would move through the band too fast, and quickly reach the maximum.  The wider spans in Kenya also indicate there is great variation in pay levels in the market for the same positions.  The Kenyan scale also illustrates that there is a much higher level of difference between the higher paid and lower paid staff, compared to the typical US scale (note:  The US scale in this example excludes Senior Executives and CEOs).

There are many other examples of differences in how compensation is defined in a country, which elements are included, and how companies choose to adapt their rewards policy to reflect local culture and practice.  Compensation and human resources practitioners are well-advised to become knowledgeable about each market and adapt their company practices accordingly.

What experiences have you had managing compensation in different markets? Share some by adding your comments.