Posted on May 4, 2009 by Warren Heaps | Comments Off on Labour Market Dynamics in Mongolia

This former communist country has undergone a rebirth recently, but still faces economic and and social challenges.  These factors, in turn, have a strong influence on the local labour market practice.

Mongolia became an independent country in 1911.  By 1924, however, a Soviet-influenced government was established, and flourished until the early 1990s.  A new, democratic constitution was adopted in 1992, and democratic elections were held in 1993.  Since then, Mongolia has been making the transition to a full market economy.

Over the last several years, Mongolia has enjoyed a robust growth rate, with GDP increases from 7.3% in 2005 to 10.2% in 2007.  Much of this growth has been driven by the mining sector, with large operations focused in cooper, gold and other commodities.  There also has been increasing foreign investment in other sectors, such as software development, telecom and food.

The global economic crisis and collapse of commodity prices has resulted in a slowdown in Mongolia.  GDP growth for 2008 dipped to 8.9%, and the Asian Development Bank predicts a further drop to just 3.0% for 2009.  From January, 2008, to April 30, 2009, the local currency, the Tugrik, has depreciated against the US dollar by about 22%, putting additional pressures on the Mongolian economy, which imports 80% of its oil, and many other basic commodities and raw materials.  Projected inflation for 2009 is about 9.5%.

Overview of the Labour Market

Birches Group recently completed the annual survey of the market in Mongolia.  The information that follows is based on the recently published survey results.

Total compensation levels in Mongolia range from about $7,400 for unskilled support staff positions such as Messengers and Drivers, to $36,000 for Managers and other senior level professionals. 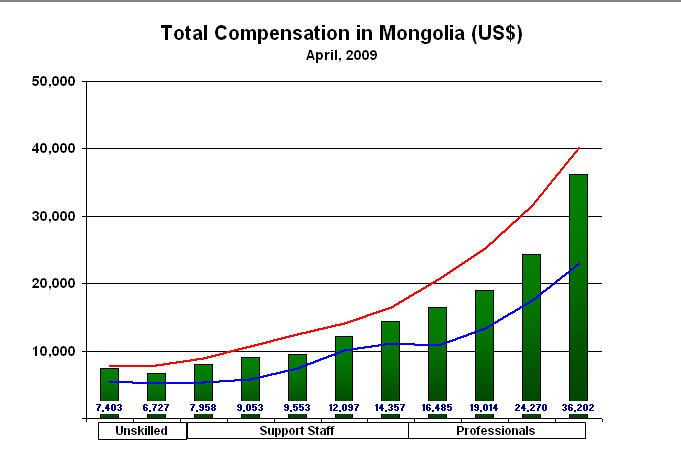 Let’s focus in on Working Level Professionals, i.e., college graduates with 3 to 5 years of experience in their respective fields, such as Finance, HR, Procurement, Engineering, Sales and Marketing.  In the graph, this group corresponds to the second column in the Professionals category.

For a Working Level Professional in Mongolia, the median total compensation ranges from about $14,000 to $22,000.  However, as the “footprint chart” illustrates below, there is a much wider range of compensation in the market – from around $9,500 to over $30,000. 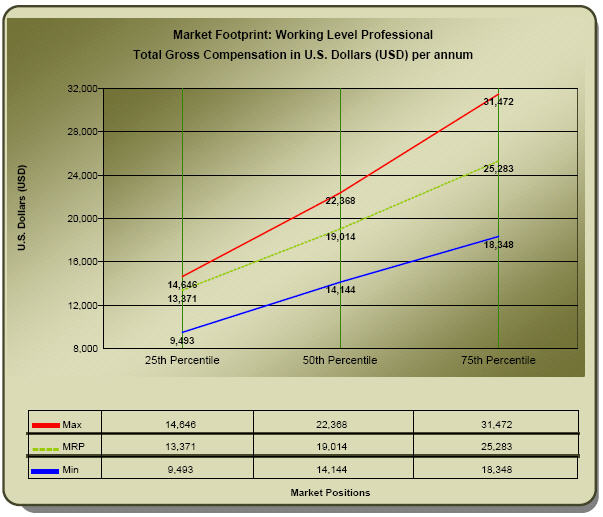 What else besides salary?

As is common in developing countries, the typical package in Mongolia for a Working Level Professional includes not only salary, but allowances, incentives and in-kind benefits.  Let’s take a closer look at the market practice for these items.

At the 50th percentile, the average breakdown of total compensation is as follows:

Composition of the Compensation Package 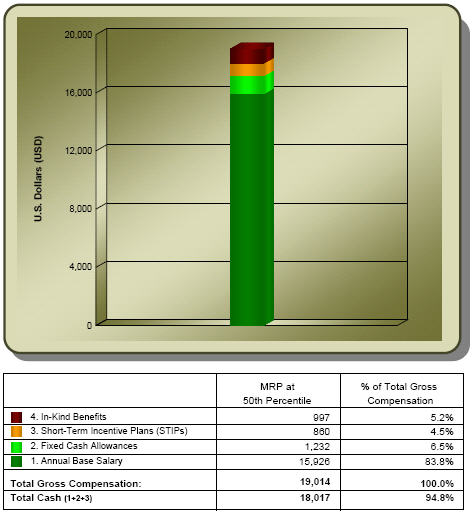 The chart above indicates a base salary of $15,926, representing about 84% of total compensation.  The rest is made up of allowances (6.5%), short-term incentives (4.5%) and in-kind benefits (5.2%).  The most common allowances are meal and beverage allowances, and cash allowances such as 13th month, mobile phone allowance and seniority premium.

For in-kind benefits, the chart below shows the categories provided; recreational activities and meals are the most common. 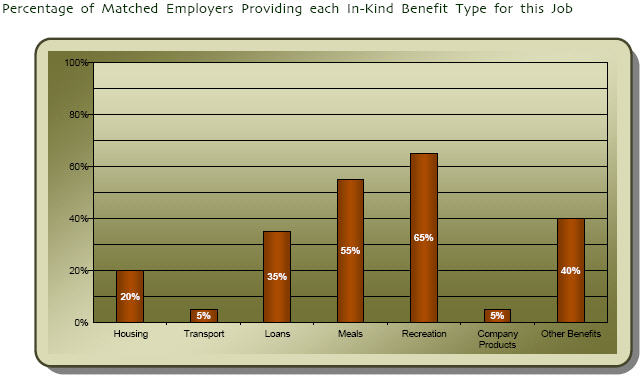 Mongolia is a dynamic market which has experienced good growth in recent years.  While there is much slower growth occuringnow, employers with businesses there still must keep abreast of market changes.  Rich survey data is one of the best ways to ensure that your compensation packages remain competitive, cost efficient, and responsive to your employee’s needs.